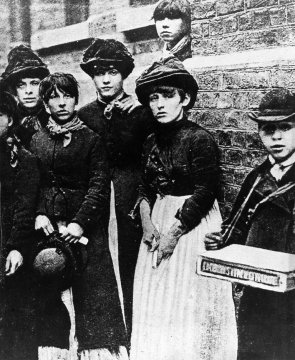 One of the most famous strikes by women workers during the nineteenth century took place during the exceptionally cold July of 1888 at Byrant and May match factory in the East End of London. The strike began when 200 workers left work in protest when the factory owners sacked three workers who had spoken to a social reformer, Annie Besant, about their working conditions.

Besant published an article in her halfpenny weekly paper "The Link" on 23 June 1888, entitled "White Slavery in London". This article about the conditions at the Byrant and May factory highlighted fourteen-hour work days, poor pay of between 4-8 shillings a week, excessive fines and the severe health complications from working with white phosphorus.

The hour for commencing work is 6.30 in summer and 8 in winter; work concludes at 6 p.m. Half-an-hour is allowed for breakfast and an hour for dinner. This long day of work is performed by young girls, who have to stand the whole of the time. A typical case is that of a girl of 16, a piece-worker; she earns 4s. a week. Out of the earnings, 2s. is paid for the rent of one room; the child lives on only bread-and-butter and tea, alike for breakfast and dinner, but related with dancing eyes that once a month she went to a meal where "you get coffee, and bread and butter, and jam, and marmalade, and lots of it. The splendid salary of 4s. is subject to deductions in the shape of fines; if the feet are dirty, or the ground under the bench is left untidy, a fine of 3d. is inflicted; for putting "burnts" - matches that have caught fire during the work.

The strike register shows that many of the workers had Irish names and lived in close proximity to each other. The workers organized themselves in the face of intimidation from the factory owners and took their campaign to parliament. They got some support from the London Trades Council and after three weeks on strike, Byrant and May met all their demands. Subsequently, the Union of Women Match Workers was formed by the workers.

The match workers' strike fund register
This text has been extracted from It just went like tinder; the mass movement and New Unionism in Britain 1889: a socialist history, John Charlton, Redwords, 1999. ISBN 1 872208 118 £6.99
Who were the match girls?
Through dramatic reconstructions this clip explores the reasons for the the successful strike by match girls (the women and teenage girls working at the Bryant and May match factory in East London) in 1888 Source - BBC 2013