The Dagenham women machinists sewed seat covers for the cars produced by a Ford Motor Company plant. As part of a re-grading exercise in 1968, these women machinists were graded as unskilled workers whereas men who did the same level of work were placed in the semi-skilled grade. The women also received less pay than the men who swept the factory floors, and were considered unskilled workers. At that time it was common practice for companies to pay women less than men, irrespective of the skills involved. 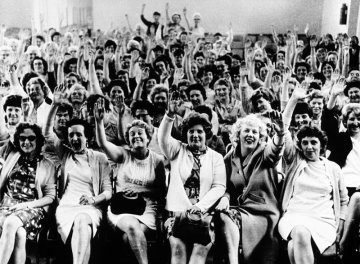 187 women sewing machinists took strike action on 7 June 1968 in support of a claim for re-grading, parity with men in the unskilled grade and recognition of their skills. At first, the union and the male workers did not support the demand for an increase in women's pay.

The women workers soon won the support of their union. The strike gained momentum when the stock of car seats ran out and their action resulted in a halt to all car production at Ford. Barbara Castle, the Employment Minister, was brought in to help negotiate a settlement.

After 3 weeks on strike, the machinists settled for 92% of the rate paid to unskilled male workers.Their actions received wide publicity and precipitated wider action in the form of several other equal pay strikes in 1968-69. This mobilisation eventually led to the passage of The Equal Pay Act 1970, the first legislation in the world aimed at ending pay discrimination between men and women.  As for the Ford machinists and other women workers at Ford, it took a few more strikes over subsequent years to achieve equal pay.

Advertisements in the 1950s
After the war, women were encouraged to turn their attention to the domestic sphere. A Persil advert shows wives competing over the whiteness of their washing. According to a woman who remembers those times, this reflected the concerns of many women during that period. Adverts do not show the 22% of married women that continued to work, although they were still expected to manage all the housework without any contribution from their partners.
Is a woman's place in the home?
Women were needed during the Second World War and enjoyed doing men's work. One lady wanted to continue with her crane driving job after the war but was not allowed. However, after 1945 the soldiers were assured their old jobs were waiting for them and women were to return to being housewives. We see several adverts to encourage women to become housewives, as well as general television ads which depict women as homemakers.