On her first visit to Cradley Heath, the trade union agitator Mary Macarthur described the forges where the chains were made by women workers as akin to medieval torture chambers. While the average pay during that period was 26 shillings a week for men and 11s a week for women, the domestic chainmakers in Cradley Heath earned just 5s to 6s for a hard 54-hour week.

After a national campaign against low pay by the Anti-Sweating League, the government introduced legislation to end “sweating” in four trades, including the domestic chain trade, where a minimum wage of 11s 3d a week was set. The employers at Cradley Heath in the West Midlands refused to pay the new wage rate. In response, the National Federation of Women Workers (NFWW) called a meeting in August 1910 at which the women refused to work at the old rates. About 800 women workers began a strike, going on daily marches. 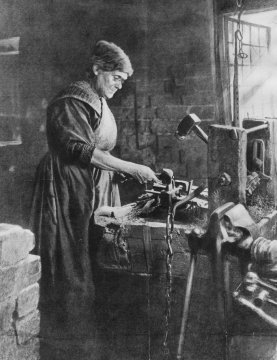 Macarthur made a film exposing the miserable conditions of the chainmakers, which won the strikers much support and the strike gained momentum. Collections were held outside church congregations and football grounds. Within a month, 60% of employers had agreed to the new minimum wage rates. The remaining employers were boycotted until, 6 weeks later, they too agreed to pay. On 22 October, the women won a minimum wage for the first time in history, doubling their pay to 11s 3d a week. By 1911, the NFWW Cradley Heath Branch had 1700 members.

For more on the Cradley Heath chain makers, see:

Women on the Home Front, 1914-1918
During the First World War, more and more women took over from men in British industry. Many women worked in munitions, allowing for a rapid rise in production; they also worked on maintaining coal, gas and power supplies. Still others took on work in transport or offices. To women, the First World War resulted in a social revolution.
British women at war, 1914-1918
Women were required to make a significant contribution during the First World War. As more men left for combat, women stepped in to take over 'men's work'. The government used propaganda films to encourage women to get involved. Jobs carried out by women included farm and factory work.
Women and the Great War
Women were unable to fight on the battlefields of Europe. Back at home in Britain, millions of women volunteered to work in munitions factories in order to play their part in the battle against Germany. This clip brings together the experiences of two women at the Woolwich Royal Arsenal and how they work with hazard and danger as well as enthusiasm and great pride.